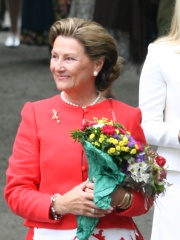 Sonja (born Sonja Haraldsen on 4 July 1937) is the Queen consort of Norway since 17 January 1991 as the wife of King Harald V.Sonja and the then Crown Prince Harald had dated for nine years prior to their marriage in 1968. They had kept their relationship a secret due to the controversy of Sonja's status as a commoner. Harald had told his father, King Olav V, that he would remain unmarried if his father did not grant consent to marry Sonja. Read more on Wikipedia

Queen Sonja of Norway is most famous for being the wife of King Harald V of Norway and the mother of Crown Prince Haakon.

Page views of Queen Sonja of Norways by language

Among companions, Queen Sonja of Norway ranks 47 out of 687. Before her are Salman the Persian, Isabella of France, Maria Carolina of Austria, Elizabeth Woodville, Anne Hathaway, and Magda Goebbels. After her are Anne of Cleves, Fawzia Fuad of Egypt, Ingrid of Sweden, Livia, Hafsa bint Umar, and Princess Helena of the United Kingdom.

Among COMPANIONS In Norway

Among companions born in Norway, Queen Sonja of Norway ranks 1. After her are Mette-Marit, Crown Princess of Norway (1973).