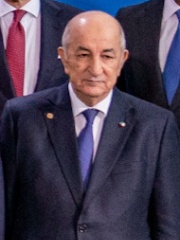 Abdelmadjid Tebboune (Arabic: عبد المجيد تبون, romanized: ʿAbd al-Majīd Tabbūn; born 17 November 1945) is an Algerian politician currently serving as the President of Algeria since December 2019 and as Minister of Defence.He took over the power from former President Abdelaziz Bouteflika and former Acting Head of State Abdelkader Bensalah. Previously, he was Prime Minister of Algeria from May 2017 to August 2017. Read more on Wikipedia

Abdelmadjid Tebboune is most famous for being the first Algerian to win a gold medal in the Olympics.

Among politicians, Abdelmadjid Tebboune ranks 1,943 out of 15,577. Before him are Mus‘ab ibn 'Umair, Herod Archelaus, Antonia Minor, Albert the Bear, Robert II of Scotland, and Mikheil Saakashvili. After him are William Longsword, Heonjong of Joseon, Marie François Sadi Carnot, Sahure, Abbas II of Persia, and Hyeonjong of Joseon.