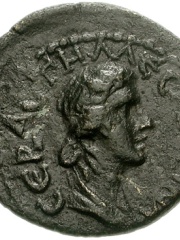 Valeria Messalina (Latin: [waˈlɛria mɛssaːˈliːna]; c. 17/20–48) was the third wife of Roman emperor Claudius. She was a paternal cousin of Emperor Nero, a second cousin of Emperor Caligula, and a great-grandniece of Emperor Augustus. A powerful and influential woman with a reputation for promiscuity, she allegedly conspired against her husband and was executed on the discovery of the plot. Read more on Wikipedia

Messalina was the wife of Roman Emperor Claudius. She is most famous for her many affairs and her involvement in a conspiracy to overthrow Claudius.

Page views of Messalinas by language

Among companions, Messalina ranks 30 out of 673. Before her are Joseph Bonaparte, Aspasia, Victoria, Princess Royal, Catherine Howard, Olympias, and Queen Silvia of Sweden. After her are Klara Hitler, Anne of Cleves, Mileva Marić, Tughril, Françoise d'Aubigné, Marquise de Maintenon, and Eugénie de Montijo.