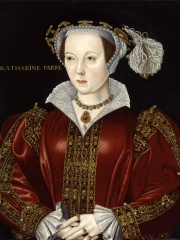 Catherine Parr, sometimes alternatively spelled Katherine, Katheryn, Kateryn or Katharine (c. August 1512 – 5 September 1548), was Queen of England and Ireland (1543–47) as the last of the six wives of King Henry VIII, and the final queen consort of the House of Tudor. She married him on 12 July 1543, and outlived him by a year and eight months. Read more on Wikipedia

Catherine Parr was the sixth and final wife of King Henry VIII. She is most famous for being the last of his wives and for being the only one to outlive him.

Among companions, Catherine Parr ranks 59 out of 687. Before her are Princess Helena of the United Kingdom, Tughril, Isabeau of Bavaria, Catherine Howard, Claude of France, and Sophie, Duchess of Hohenberg. After her are Bathsheba, Guinevere, Mordred, Isabella of Portugal, Antinous, and Maria Feodorovna.

Among people born in 1512, Catherine Parr ranks 3. Before her are Gerardus Mercator and James V of Scotland. After her are Judah Loew ben Bezalel, Henry, King of Portugal, Niccolò dell'Abbate, Manco Inca Yupanqui, Devlet I Giray, Robert Recorde, Mikołaj "the Red" Radziwiłł, Diego Laynez, and Prospero Fontana. Among people deceased in 1548, Catherine Parr ranks 1. After her are Sigismund I the Old, Gonzalo Pizarro, Juan Diego, and Juan de Zumárraga.