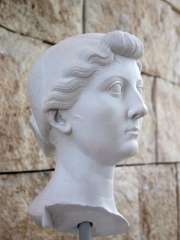 Livia Drusilla (30 January 59 BC – AD 29) was Roman empress from 27 BC to AD 14 as the wife of Emperor Caesar Augustus. She was known as Julia Augusta after her formal adoption into the Julian family in AD 14. Livia was the daughter of Roman senator Marcus Livius Drusus Claudianus and his wife Alfidia. Read more on Wikipedia

Livia is most famous for being the wife of Emperor Augustus and the mother of Emperor Tiberius.

Page views of Livias by language

Among companions, Livia ranks 38 out of 673. Before her are Anne of Cleves, Mileva Marić, Tughril, Françoise d'Aubigné, Marquise de Maintenon, Eugénie de Montijo, and Maria Theresa of Spain. After her are Madame du Barry, Catherine Parr, Zita of Bourbon-Parma, Magda Goebbels, Salman the Persian, and Maria Carolina of Austria.