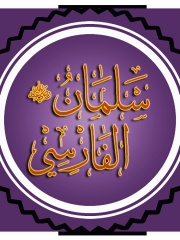 Salman the Persian or Salman al-Farsi (Arabic: سَلْمَان ٱلْفَارِسِيّ‎, Salmān al-Fārisīy), born Roozbeh (Persian: روزبه‎, "good day"), was a companion of the Islamic prophet Muhammad and the first Persian who converted to Islam. During some of his later meetings with the other Sahabah, he was referred to by the kunya Abu Abdullah ("Father of Abdullah"). He is credited with the suggestion of digging a trench around Medina, a Sasanian military technique, when it was attacked by Mecca in the Battle of the Trench. Read more on Wikipedia

Page views of Salman the Persians by language

Among companions, Salman the Persian ranks 41 out of 687. Before him are Elisabeth of Valois, Madame du Barry, Marie Leszczyńska, Eugénie de Montijo, Caroline of Ansbach, and Zita of Bourbon-Parma. After him are Isabella of France, Maria Carolina of Austria, Elizabeth Woodville, Anne Hathaway, Magda Goebbels, and Queen Sonja of Norway.

Among COMPANIONS In Iran