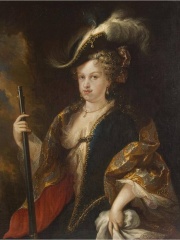 Maria Luisa Gabriella of Savoy (17 September 1688 – 14 February 1714), nicknamed La Savoyana, was Queen of Spain by marriage to Philip V. She acted as regent during her husband's absence from 1702 until 1703 and had great influence as a political adviser during the War of the Spanish Succession. Read more on Wikipedia

Maria Luisa of Savoy was the Queen consort of King Charles IV of Spain and the mother of King Ferdinand VII. She was the youngest daughter of Victor Amadeus III of Sardinia and Maria Antonietta of Spain.

Page views of Maria Luisa of Savoys by language

Among companions, Maria Luisa of Savoy ranks 126 out of 673. Before her are Zainab bint Muhammad, Umm Kulthum bint Muhammad, Victoria Eugenie of Battenberg, Maria of Aragon, Queen of Portugal, Elena of Montenegro, and Louise of Hesse-Kassel. After her are Constance, Queen of Sicily, Margaret of Burgundy, Queen of France, Saskia van Uylenburgh, Marie of Anjou, Inês de Castro, and Sophia of Nassau.

Among people born in 1688, Maria Luisa of Savoy ranks 6. Before her are Nader Shah, Frederick William I of Prussia, Emanuel Swedenborg, Ulrika Eleonora, Queen of Sweden, and Gyeongjong of Joseon. After her are Juraj Jánošík, Alexander Pope, James Francis Edward Stuart, Giuseppe Castiglione, Pierre de Marivaux, and Domenico Zipoli. Among people deceased in 1714, Maria Luisa of Savoy ranks 2. Before her is Anne, Queen of Great Britain. After her are Sophia of Hanover, Charles, Duke of Berry, Bernardino Ramazzini, Charlotte Amalie of Hesse-Kassel, Andreas Schlüter, Marie Anne Mancini, Anthony Ulrich, Duke of Brunswick-Wolfenbüttel, Constantin Brâncoveanu, Carlo Fontana, and Vasily Golitsyn.