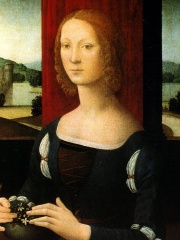 Caterina Sforza (1463 – 28 May 1509) was an Italian noblewoman, the Countess of Forlì and Lady of Imola, firstly with her husband Girolamo Riario, and after his death as a regent of her son Ottaviano. The descendant of a dynasty of noted condottieri, from an early age, Caterina distinguished herself through her bold and impetuous actions taken to safeguard her possessions from possible usurpers and to defend her dominions from attack, when they were involved in political intrigues. In her private life, Caterina was devoted to various activities, including experiments in alchemy and a love of hunting and dancing. Read more on Wikipedia

Caterina Sforza was a powerful woman in Renaissance Italy. She was the daughter of Count Girolamo Riario and Countess Caterina de' Medici, and wife of the notorious tyrant Gian Galeazzo Sforza. Caterina Sforza is most famous for her role in the downfall of her husband's regime.

Among companions, Caterina Sforza ranks 131 out of 687. Before her are Constance, Queen of Sicily, Sawda bint Zamʿa, Louise of Hesse-Kassel, Marie of Anjou, Inês de Castro, and Elena of Montenegro. After her are Olga Constantinovna of Russia, Priscilla Presley, Marie Adélaïde of Savoy, Caroline of Baden, Mumtaz Mahal, and Malhun Hatun.

Among people born in 1463, Caterina Sforza ranks 3. Before her are Giovanni Pico della Mirandola and Frederick III, Elector of Saxony. After her is Alessandro Achillini. Among people deceased in 1509, Caterina Sforza ranks 2. Before her is Henry VII of England. After her are Lady Margaret Beaufort, Bernt Notke, João da Nova, Shen Zhou, and Adam Kraft.