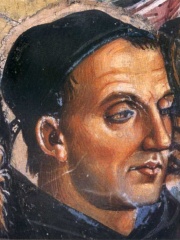 Fra Angelico (born Guido di Pietro; c. 1395 – February 18, 1455) was a Dominican friar and Italian painter of the Early Renaissance, described by Vasari in his Lives of the Artists as having "a rare and perfect talent". He earned his reputation primarily for the series of frescoes he made for his own friary, San Marco, in Florence.He was known to contemporaries as Fra Giovanni da Fiesole (Brother John of Fiesole) and Fra Giovanni Angelico (Angelic Brother John). Read more on Wikipedia

Fra Angelico is most famous for his paintings of religious scenes.

Among people born in 1400, Fra Angelico ranks 1. After him are Gilles Binchois, Bartolomeo Colleoni, Gennadius Scholarius, Owen Tudor, Konrad Witz, Filarete, Isabella, Duchess of Lorraine, Alexander I of Moldavia, Ausiàs March, Vladislav II of Wallachia, and Hüma Hatun. Among people deceased in 1455, Fra Angelico ranks 2. Before him is Pope Nicholas V. After him are Lorenzo Ghiberti, Pisanello, Isabel of Coimbra, Edmund Beaufort, 2nd Duke of Somerset, and Henry Percy, 2nd Earl of Northumberland.