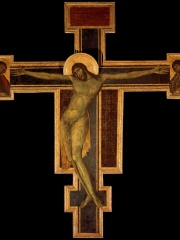 Cimabue (US: ; Italian: [tʃimaˈbuːe]; Ecclesiastical Latin: [tʃiˈmabu.e]; c. 1240 – 1302), also known as Cenni di Pepo or Cenni di Pepi, was an Italian painter and designer of mosaics from Florence. Although heavily influenced by Byzantine models, Cimabue is generally regarded as one of the first great Italian painters to break from the Italo-Byzantine style. While medieval art then was scenes and forms that appeared relatively flat and highly stylized, Cimabue's figures were depicted with more advanced lifelike proportions and shading than other artists of his time. Read more on Wikipedia

Cimabue is most famous for his frescoes in the Upper Church of Basilica di Santa Croce in Florence.

Page views of Cimabues by language

Among people born in 1240, Cimabue ranks 2. Before him is Pope Benedict XI. After him are Yunus Emre, Arnolfo di Cambio, Arnaldus de Villa Nova, Abraham Abulafia, Pietro Cavallini, Henry VI, Count of Luxembourg, Magnus III of Sweden, Siger of Brabant, Emperor Duzong, and Elizabeth the Cuman. Among people deceased in 1302, Cimabue ranks 1. After him are Arnolfo di Cambio, Gertrude the Great, Constance of Sicily, Queen of Aragon, Valdemar, King of Sweden, Robert II, Count of Artois, Al-Hakim I, and Blanche of Artois.