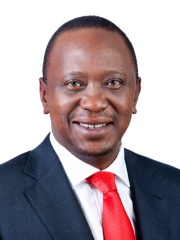 Uhuru Muigai Kenyatta CGH FB ( born 26 October 1961) is a Kenyan politician who served as the 4th president of Kenya from 2013 to 2022.Uhuru served as the member of parliament (MP) for Gatundu South from 2002 to 2013. He also served as Deputy Prime Minister to Raila Odinga from 2008 to 2013. Currently, he is a member and the party leader of the Jubilee Party of Kenya whose popularity has since dwindled. Read more on Wikipedia

Among politicians, Uhuru Kenyatta ranks 10,746 out of 15,577. Before him are Hiệp Hòa, Douglas Hyde, Sigeberht the Good, Catherine of Bulgaria, Creoda of Mercia, and John Lewis. After him are Ansgarde of Burgundy, Grigory Shelikhov, Pedro Santana, Egbert II, Margrave of Meissen, Ivica Dačić, and Pandulf Ironhead.