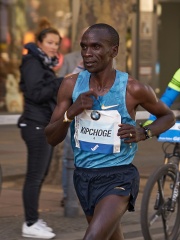 Eliud Kipchoge (English: EL-ee-OOD kip-CHOH-gə; born 5 November 1984) is a Kenyan long-distance runner who competes in the marathon and formerly specialized at the 5000 metre distance. Widely regarded as one of the greatest marathon runners of all time, he is the 2016 and 2020 Olympic marathon champion and the world record holder in the marathon with a time of 2:01:09 set at the 2022 Berlin Marathon. He has run four of the six fastest marathons in history.Kipchoge claimed his first individual world championship title in 2003 by winning the junior race at the World Cross Country Championships and setting a world junior record over 5000 m on the track. Read more on Wikipedia

Among ATHLETES In Kenya