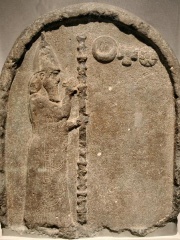 Nabonidus (; Akkadian: 𒀭𒀝𒉎𒌇 dNabû-naʾid, "Nabu is praised") was the last king of the Neo-Babylonian Empire, reigning from 556–539 BC (17 years). He seized power in a coup, toppling King Labashi-Marduk. He also angered the priests and commoners of Babylon by neglecting the city’s chief god, Marduk, and elevating the moon god, Sin, to the highest status. Read more on Wikipedia

Since 2007, the English Wikipedia page of Nabonidus has received more than 398,393 page views. His biography is available in 40 different languages on Wikipedia making him the 1,266th most popular politician.

Page views of Naboniduses by language

Among politicians, Nabonidus ranks 1,260 out of 14,801. Before him are Yeonsangun of Joseon, Gaspard II de Coligny, Berenice IV of Egypt, David Lloyd George, Almanzor, and Ion Iliescu. After him are Václav Klaus, Roh Moo-hyun, Faisal I of Iraq, Ptolemy VI Philometor, Ruth, and Levi Eshkol.

Others Deceased in 538 BC