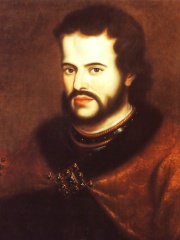 Ivan V Alekseyevich (Russian: Иван V Алексеевич, 6 September [O.S. 27 August] 1666 – 8 February [O.S. 29 January] 1696) was a joint Tsar of Russia with his younger half-brother Peter the Great, who co-reigned between 1682 and 1696. Ivan was the youngest son of Alexis I of Russia by his first wife, Maria Miloslavskaya, while Peter was the only son of Alexis by his second wife, Natalya Naryshkina. Read more on Wikipedia

Ivan IV of Russia is most famous for his rule of Russia from 1533 to 1584. He is also known as Ivan the Terrible.

Page views of Ivan V of Russias by language

Among politicians, Ivan V of Russia ranks 857 out of 15,710. Before him are Henry Stuart, Lord Darnley, Richard von Coudenhove-Kalergi, Béla Kun, Louis, Duke of Burgundy, Valentinian II, and Shamil, 3rd Imam of Dagestan. After him are Casimir III the Great, Andronikos II Palaiologos, Antigonus I Monophthalmus, Prince Andrew of Greece and Denmark, Kara Mustafa Pasha, and Basil I.