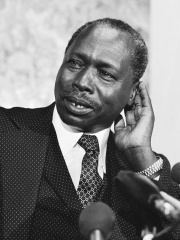 Daniel Toroitich arap Moi ( MOH-ee; 2 September 1924 – 4 February 2020) was a Kenyan statesman and politician who was the second and longest-serving President of Kenya from 1978 to 2002. He previously served as the third Vice President of Kenya from 1967 to 1978, and succeeded President Jomo Kenyatta following the latter's death. Born into the Tugen sub-group of the Kalenjin people in the Kenyan Rift Valley, Moi studied as a boy at the Africa Inland Mission school before training as a teacher at the Tambach teachers training college, working in that profession until 1955. Read more on Wikipedia

Daniel arap moi is most famous for being the president of Kenya from 1978 to 2002.

Among politicians, Daniel arap Moi ranks 3,988 out of 15,710. Before him are Zaifeng, Prince Chun, Mohammad Najibullah, Fuad II of Egypt, Louis II, Count of Flanders, Marcus Aurelius Marius, and Abbas I of Egypt. After him are Ardashir II, Liu Zhang, Labarna I, Antonio I, Prince of Monaco, Charles Frederick, Grand Duke of Baden, and Caroline Amalie of Augustenburg.