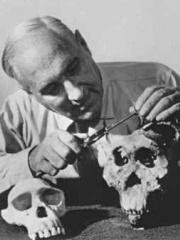 Louis Seymour Bazett Leakey (7 August 1903 – 1 October 1972) was a Kenyan/British paleoanthropologist and archaeologist whose work was important in demonstrating that humans evolved in Africa, particularly through discoveries made at Olduvai Gorge with his wife, fellow paleontologist Mary Leakey. Having established a program of palaeoanthropological inquiry in eastern Africa, he also motivated many future generations to continue this scholarly work. Several members of Leakey's family became prominent scholars themselves.Another of Leakey's legacies stems from his role in fostering field research of primates in their natural habitats, which he saw as key to understanding human evolution. Read more on Wikipedia

Louis Leakey is most famous for his discovery of the Zinjanthropus skull in Olduvai Gorge, Tanzania. He also discovered the Homo Habilis skull in 1960.

Most Popular Archaeologists in Wikipedia

Among ARCHAEOLOGISTS In Kenya