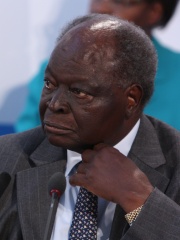 Emilio Stanley Mwai Kibaki (15 November 1931 – 21 April 2022) was a Kenyan politician who served as the third President of Kenya from December 2002 until April 2013 and is regarded as one of Kenya's founding fathers.He had previously served as the fourth Vice-President of Kenya for ten years from 1978 to 1988 under President Daniel arap Moi. He also held cabinet ministerial positions in the Jomo Kenyatta and Daniel arap Moi governments, including as minister for Finance (1969–1981) under Kenyatta, and Minister for Home Affairs (1982–1988) and Minister for Health (1988–1991) under Moi.Kibaki served as an opposition Member of Parliament from 1992 to 2002. He unsuccessfully vied for the presidency in 1992 and 1997. Read more on Wikipedia