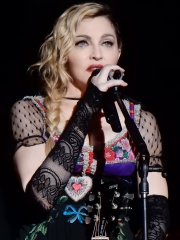 Madonna Louise Ciccone (; Italian: [tʃikˈkoːne]; born August 16, 1958) is an American singer-songwriter and actress. Dubbed the "Queen of Pop", Madonna has been noted for her continual reinvention and versatility in music production, songwriting, and visual presentation. She has pushed the boundaries of artistic expression in mainstream music, while continuing to maintain control over every aspect of her career. Read more on Wikipedia

Madonna is most famous for her music, which spans three decades. She is the best-selling female recording artist of all time, with over 200 million records sold worldwide.

Page views of Madonnas by language

Among musicians, Madonna ranks 15 out of 2,662. Before her are Jimi Hendrix, Leonard Cohen, Elton John, Clara Schumann, Paul McCartney, and Leopold Mozart. After her are Arcangelo Corelli, Ray Charles, Brian May, Jean-Michel Jarre, Charlie Watts, and George Harrison.