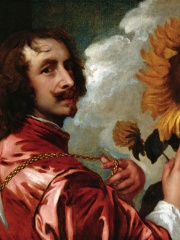 Sir Anthony van Dyck (Dutch pronunciation: [vɑn ˈdɛi̯k], many variant spellings; 22 March 1599 – 9 December 1641) was a Flemish Baroque artist who became the leading court painter in England after success in the Southern Netherlands and Italy. The seventh child of Frans van Dyck, a wealthy Antwerp silk merchant, Anthony was precocious as a youth and painted from an early age. In his late teens he was already enjoying success as an independent painter, becoming a master in the Antwerp guild in 1618. Read more on Wikipedia

Since 2007, the English Wikipedia page of Anthony van Dyck has received more than 690,833 page views. His biography is available in 69 different languages on Wikipedia making him the 48th most popular painter.