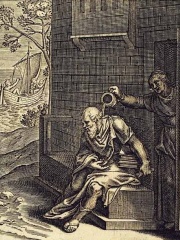 Since 2007, the English Wikipedia page of Xanthippe has received more than 384,963 page views. Her biography is available in 35 different languages on Wikipedia making her the 418th most popular politician.

Page views of Xanthippes by language

Among politicians, Xanthippe ranks 414 out of 14,801. Before her are Henry the Fowler, Louis X of France, Musa I of Mali, Imre Nagy, Şehzade Bayezid, and Yongle Emperor. After her are Charles III of Spain, Frederick III, German Emperor, Matthias, Holy Roman Emperor, Hugo Chávez, Frederick I of Prussia, and Edward II of England.

Among people born in 500 BC, Xanthippe ranks 3. Before her are Myron and Anaxagoras. After her are Artaxerxes I of Persia, Leucippus, Artemisia I of Caria, Xerxes II of Persia, Brennus, Sogdianus of Persia, Cyrus the Younger, Ictinus, and Ezra. Among people deceased in 400 BC, Xanthippe ranks 2. Before her is Aspasia. After her are Damocles, Zeuxis, Leochares, Alcamenes, Teos of Egypt, Phaedo of Elis, Ctesias, Parysatis, Eubulides, and Oxyartes.