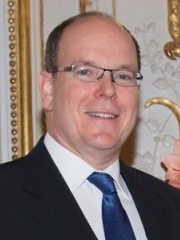 Albert II (Albert Alexandre Louis Pierre Grimaldi; born 14 March 1958) is Prince of Monaco, since 2005. Albert was born at the Prince's Palace of Monaco, and he is the second child and only son of Prince Rainier III and Grace Kelly. He attended the Lycée Albert Premier before studying political science at Amherst College. Read more on Wikipedia

Page views of Albert II, Prince of Monacos by language

Among noblemen, Albert II, Prince of Monaco ranks 68 out of 842. Before him are Fatma Sultan, Herodias, Empress Matilda, Olga of Kiev, Afonso de Albuquerque, and Princess Märtha of Sweden. After him are Philip the Bold, Prince Gustaf Adolf, Duke of Västerbotten, Maria Alexandrovna, Princess Alice of Battenberg, Francesco I de' Medici, Grand Duke of Tuscany, and Dmitry Donskoy.

Others born in Monaco

Among NOBLEMEN In Monaco