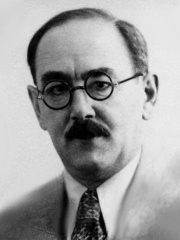 Imre Nagy (Hungarian: [ˈimrɛ ˈnɒɟ]; 7 June 1896 – 16 June 1958) was a Hungarian communist politician who served as Chairman of the Council of Ministers (de facto Prime Minister) of the Hungarian People's Republic from 1953 to 1955. In 1956 Nagy became leader of the Hungarian Revolution of 1956 against the Soviet-backed government, for which he was sentenced to death and executed two years later. Nagy was a committed communist from soon after the Russian Revolution, and through the 1920s he engaged in underground party activity in Hungary. Read more on Wikipedia

Imre Nagy was a Hungarian politician who was the Prime Minister of Hungary for a few months in 1953. He was most famous for his involvement in the 1956 Hungarian Revolution, where he attempted to create a democracy in Hungary.

Among politicians, Imre Nagy ranks 485 out of 15,710. Before him are Louis VII of France, Şehzade Bayezid, Sergio Mattarella, Alexios I Komnenos, Stephen Báthory, and Louis VIII of France. After him are Frederick IX of Denmark, Moshe Dayan, William IV of the United Kingdom, Maximilian I of Mexico, Joseph I, Holy Roman Emperor, and James II of England.