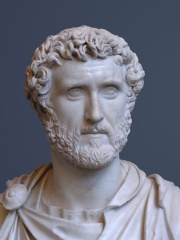 Antoninus Pius (; in full: Titus Aelius Hadrianus Antoninus Augustus Pius; 19 September 86 – 7 March 161) was Roman emperor from 138 to 161. He was one of the Five Good Emperors in the Nerva–Antonine dynasty.Born into a senatorial family, Antoninus held various offices during the reign of emperor Hadrian, who adopted him as his son and successor shortly before his death. Antoninus acquired the cognomen Pius after his accession to the throne, either because he compelled the Senate to deify his adoptive father, or because he had saved senators sentenced to death by Hadrian in his later years. Read more on Wikipedia

Since 2007, the English Wikipedia page of Antoninus Pius has received more than 1,880,283 page views. His biography is available in 80 different languages on Wikipedia making him the 240th most popular politician.

Among politicians, Antoninus Pius ranks 237 out of 14,801. Before him are Puyi, Georges Danton, Philip II of France, A. P. J. Abdul Kalam, Theodore Roosevelt, and Golda Meir. After him are Louis XI of France, Babur, Charles VII of France, António de Oliveira Salazar, Shimon Peres, and Mehmed VI.