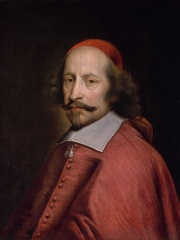 Cardinal Jules Mazarin (, also UK: , US: , French: [ʒyl mazaʁɛ̃]; 14 July 1602 – 9 March 1661), born Giulio Raimondo Mazzarino (Italian: [ˈdʒuːljo raiˈmondo madːzaˈriːno]) or Mazarini, was an Italian cardinal, diplomat, and politician who served as the chief minister to the kings of France Louis XIII and Louis XIV from 1642 until his death in 1661. In 1654 he acquired the title Duke of Mayenne, and in 1659, 1st Duke of Rethel and Nevers. After serving as a papal diplomat for Pope Urban VIII, Mazarin offered his diplomatic services to Cardinal Richelieu and moved to Paris in 1640. Read more on Wikipedia

Cardinal Mazarin is most famous for being the chief minister of France during the minority of Louis XIV.

Among politicians, Cardinal Mazarin ranks 294 out of 15,710. Before him are Alexander II of Russia, Victor Emmanuel II of Italy, Nerva, Croesus, Sejong the Great, and Rudolf II, Holy Roman Emperor. After him are Konstantin Chernenko, Charles VI of France, Elizabeth of Russia, Shimon Peres, Hugh Capet, and Joachim von Ribbentrop.