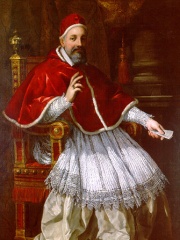 Pope Urban VIII (Latin: Urbanus VIII; Italian: Urbano VIII; baptised 5 April 1568 – 29 July 1644), born Maffeo Vincenzo Barberini, was head of the Catholic Church and ruler of the Papal States from 6 August 1623 to his death in 1644. As pope, he expanded the papal territory by force of arms and advantageous politicking, and was also a prominent patron of the arts and a reformer of Church missions. However, the massive debts incurred during his pontificate greatly weakened his successors, who were unable to maintain the papacy's longstanding political and military influence in Europe. Read more on Wikipedia

Pope Urban VIII is most famous for his decision to suppress the Jesuits.

Among religious figures, Pope Urban VIII ranks 109 out of 2,238. Before him are Bilal ibn Rabah, Albertus Magnus, Pope Pius V, Elizabeth, Esther, and Pope Pius III. After him are Salome, Pope Clement I, Pope Gregory XVI, Simon the Zealot, Thérèse of Lisieux, and Hassan-i Sabbah.