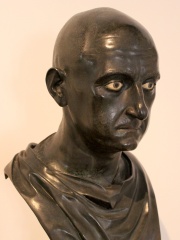 Publius Cornelius Scipio Africanus (; 236/235 – 183 BC) was a Roman general and later consul who is often regarded as one of the greatest military commanders and strategists of all time. His main achievements were during the Second Punic War. He is best known for defeating Hannibal at the final Battle of Zama (near modern Zama, Tunisia) in 202 BC. Read more on Wikipedia

Since 2007, the English Wikipedia page of Scipio Africanus has received more than 2,174,648 page views. His biography is available in 59 different languages on Wikipedia making him the 257th most popular politician.

Among politicians, Scipio Africanus ranks 254 out of 14,801. Before him are François Mitterrand, Ibrahim of the Ottoman Empire, Catherine I of Russia, Clara Zetkin, Martin Bormann, and Khafra. After him are Beatrix of the Netherlands, James VI and I, Charles XII of Sweden, Julian, Woodrow Wilson, and Nicholas I of Russia.

Others Deceased in 183 BC