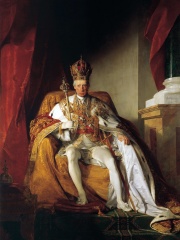 Francis II (German: Franz II.; 12 February 1768 – 2 March 1835) was the last emperor of the Holy Roman Empire, ruling from 1792 until 6 August 1806, when he abdicated soon after the creation of the Confederation of the Rhine by Napoleon. On 11 August 1804, as a response to the coronation of Napoleon as emperor of the French earlier that year, he announced that he would henceforth assume the title of hereditary emperor of Austria, ruling from 1804 to 1835 as Francis I. He was also king of Hungary, Croatia and Bohemia. Read more on Wikipedia

Since 2007, the English Wikipedia page of Francis II, Holy Roman Emperor has received more than 1,869,882 page views. His biography is available in 70 different languages on Wikipedia making him the 428th most popular politician.

Among politicians, Francis II, Holy Roman Emperor ranks 424 out of 14,801. Before him are Hugo Chávez, Frederick I of Prussia, Edward II of England, Benjamin Netanyahu, Artaxerxes I of Persia, and Merneptah. After him are Hafsa Sultan, Shah Jahan, Lothair I, Juan Perón, Henry II of England, and Vladimir the Great.