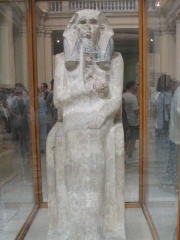 Djoser (also read as Djeser and Zoser) was an ancient Egyptian pharaoh of the 3rd Dynasty during the Old Kingdom and the founder of this epoch. He is also known by his Hellenized names Tosorthros (from Manetho) and Sesorthos (from Eusebius). He was the son of king Khasekhemwy and queen Nimaathap, but whether he also was the direct throne successor is still unclear. Read more on Wikipedia

Djoser is most famous for building the first stone pyramid, the Step Pyramid, at Saqqara.

Page views of Djosers by language

Among politicians, Djoser ranks 315 out of 15,710. Before him are Sigismund, Holy Roman Emperor, Edward IV of England, Ferdinand I of Austria, Louis XI of France, Kangxi Emperor, and Gerald Ford. After him are Qianlong Emperor, Philip V of Spain, Tolui, Bhumibol Adulyadej, Charles II of Spain, and Ahmed II.