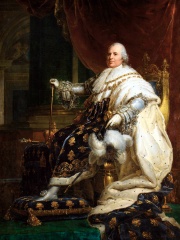 Louis XVIII (Louis Stanislas Xavier; 17 November 1755 – 16 September 1824), known as the Desired (French: le Désiré), was King of France from 1814 to 1824, except for the Hundred Days in 1815. He spent twenty-three years in exile: during the French Revolution and the First French Empire (1791–1814); and during the Hundred Days. Until his accession to the throne of France, he held the title of Count of Provence as brother of King Louis XVI. On 21 September 1792, the National Convention abolished the monarchy and deposed Louis XVI, who was later executed by guillotine. Read more on Wikipedia

Since 2007, the English Wikipedia page of Louis XVIII of France has received more than 2,053,171 page views. His biography is available in 71 different languages on Wikipedia making him the 148th most popular politician.

Page views of Louis XVIII of Frances by language

Among politicians, Louis XVIII of France ranks 146 out of 14,801. Before him are Paul von Hindenburg, Napoleon II, Brutus the Younger, Anne, Queen of Great Britain, Harry S. Truman, and Mohammad Reza Pahlavi. After him are Murad II, Joseph Goebbels, Darius III, Reinhard Heydrich, Louis IX of France, and Francis I of France.