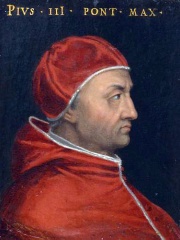 Pope Pius III (9 May 1439 – 18 October 1503), born Francesco Todeschini, was head of the Catholic Church and ruler of the Papal States from 22 September 1503 to his death. At just twenty-six days, he had one of the shortest pontificates in papal history.Francesco was the nephew of Pope Pius II, who granted him the use of the family name "Piccolomini", and appointed the twenty-one-year old Francesco as Archbishop of Siena. He served as papal legate in a number of places. Read more on Wikipedia

Pope Pius III was most famous for being the pope who was pope for the shortest amount of time. He served as pope for only two months before he died.

Among people born in 1439, Pope Pius III ranks 1. After him are Cosimo Rosselli, Francesco di Giorgio Martini, Joan of Portugal, and Sigismund, Duke of Bavaria. Among people deceased in 1503, Pope Pius III ranks 2. Before him is Pope Alexander VI. After him are Elizabeth of York, Sophia Palaiologina, Piero the Unfortunate, Margaret of York, Sten Sture the Elder, Peter II, Duke of Bourbon, George, Duke of Bavaria, Bona of Savoy, Pierre d'Aubusson, and Giovanni Pontano.