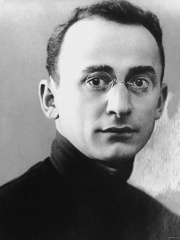 Lavrentiy Pavlovich Beria (; Russian: Лавре́нтий Па́влович Бе́рия, tr. Lavréntiy Pávlovich Bériya, IPA: [ˈbʲerʲiə]; Georgian: ლავრენტი ბერია, romanized: lavrent'i beria, IPA: [bɛriɑ]; 29 March [O.S. 17 March] 1899 – 23 December 1953) was a Georgian Bolshevik and Soviet politician, Marshal of the Soviet Union and state security administrator, chief of the Soviet security, and chief of the People's Commissariat for Internal Affairs (NKVD) under Joseph Stalin during World War II, and promoted to deputy premier under Stalin from 1941. He later officially joined the Politburo in 1946. Beria was the longest-lived and most influential of Stalin's secret police chiefs, wielding his most substantial influence during and after World War II. Read more on Wikipedia

Lavrentiy Beria was most famous for his involvement in the Soviet Union's nuclear weapons program.

Among politicians, Lavrentiy Beria ranks 775 out of 15,710. Before him are Isabella II of Spain, Ferdinand I of Bulgaria, François Hollande, Trygve Lie, Alexander Kerensky, and Henry VII, Holy Roman Emperor. After him are Walter Ulbricht, Justin I, Harald Bluetooth, Simon of Cyrene, Petronius Maximus, and Chaim Weizmann.