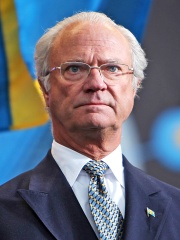 Carl XVI Gustaf /kɑːɭ dɛn ˈsɛ̂ksˌtɔndɛ ˈgɵ̂stav/ (Carl Gustaf Folke Hubertus; born 30 April 1946) is King of Sweden. He ascended the throne on the death of his grandfather, Gustaf VI Adolf, on 15 September 1973. He is the youngest child and only son of Prince Gustaf Adolf, Duke of Västerbotten, and Princess Sibylla of Saxe-Coburg and Gotha. Read more on Wikipedia

Carl XVI Gustaf is most famous for being the King of Sweden. He is the son of Gustaf VI Adolf and Princess Sibylla.

Page views of Carl XVI Gustaf of Swedens by language

Among politicians, Carl XVI Gustaf of Sweden ranks 263 out of 15,577. Before him are Antoninus Pius, Empress Dowager Cixi, Louis XVII of France, Björn Ironside, Charles VII of France, and Neville Chamberlain. After him are Tolui, Baldwin IV of Jerusalem, Philippe Pétain, Rüstem Pasha, Nursultan Nazarbayev, and Philip IV of Spain.