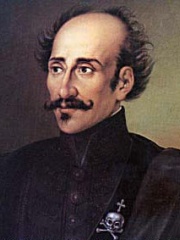 Alexandros Ypsilantis (Greek: Αλέξανδρος Υψηλάντης, romanized: Aléxandros Ypsilántis, pronounced [aˈleksanðros ipsiˈla(n)dis]; Romanian: Alexandru Ipsilanti; Russian: Александр Константинович Ипсиланти, romanized: Aleksandr Konstantinovich Ipsilanti; 12 December 1792 – 31 January 1828) was a Greek nationalist politician who was member of a prominent Phanariot Greek family, a prince of the Danubian Principalities, a senior officer of the Imperial Russian cavalry during the Napoleonic Wars, and a leader of the Filiki Etaireia, a secret organization that coordinated the beginning of the Greek War of Independence against the Ottoman Empire. Read more on Wikipedia

Alexandros Ypsilantis is most famous for leading the Filiki Eteria, a secret society of Greek patriots, in an uprising against the Ottoman Empire, which was the ruling power in Greece at the time.