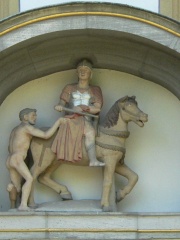 Martin of Tours (Latin: Sanctus Martinus Turonensis; 316/336 – 8 November 397), also known as Martin the Merciful, was the third bishop of Tours. He has become one of the most familiar and recognizable Christian saints in France, heralded as the patron saint of the Third Republic, and is patron saint of many communities and organizations across Europe. A native of Pannonia (in central Europe), he converted to Christianity at a young age. Read more on Wikipedia

The most famous thing that Martin of Tours is known for is his conversion to Christianity. He was a Roman soldier who was stationed in Gaul. One day, he met a beggar, who was a Christian. The beggar asked him to give him some of his food. Martin shared his lunch with the beggar and was converted to Christianity.

Page views of Martin of Tours by language

Among religious figures, Martin of Tours ranks 29 out of 2,238. Before him are John Calvin, Ali, Abu Bakr, Matthew the Apostle, Saint Barbara, and Samson. After him are Jonah, Saint Stephen, John the Apostle, Pope Benedict XVI, Saint Lucy, and Husayn ibn Ali.

Among RELIGIOUS FIGURES In Hungary