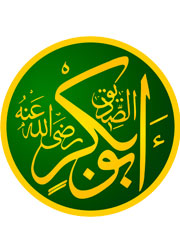 Abu Bakr Abdallah ibn Uthman Abi Quhafa (Arabic: أَبُو بَكْرٍ عَبْدُ ٱللهِ بْنِ عُثْمَانَ أَبِي قُحَافَةَ, romanized: Abū Bakr ʿAbd Allāh ibn ʿUthmān Abī Quḥāfa; c. 573 – 23 August 634) was the senior companion and was, through his daughter Aisha, a father-in-law of the Islamic prophet Muhammad, as well as the first caliph of Islam. He is known with the honorific title al-Siddiq by Muslims. Abu Bakr became one of the first converts to Islam and extensively contributed his wealth in support of Muhammad's work. Read more on Wikipedia

Abu bakr is most famous for being the first caliph of the muslim empire.

Among religious figures, Abu Bakr ranks 25 out of 2,238. Before him are Saint George, Saint Joseph, Andrew the Apostle, Elijah, John Calvin, and Ali. After him are Matthew the Apostle, Saint Barbara, Samson, Martin of Tours, Jonah, and Saint Stephen.