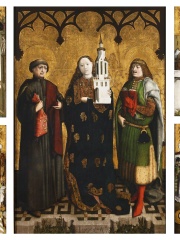 Saint Barbara (Ancient Greek: Ἁγία Βαρβάρα; Coptic: Ϯⲁⲅⲓⲁ Ⲃⲁⲣⲃⲁⲣⲁ; Church Slavonic: Великомученица Варва́ра Илиопольская; Arabic: القديسة الشهيدة بربارة), known in the Eastern Orthodox Church as the Great Martyr Barbara, was an early Christian Lebanese and Greek saint and martyr. Accounts place her in the 3rd century in Heliopolis Phoenicia, present-day Baalbek, Lebanon, and recent discovered texts in the Saida early church archives suggest her maternal grandmother is a descendant from Miye ou Miye village. There is no reference to her in the authentic early Christian writings nor in the original recension of Saint Jerome's martyrology.Despite the legends detailing her story, the earliest references to her supposed 3rd-century life do not appear until the 7th century, and veneration of her was common, especially in the East, from the 9th century.Because of doubts about the historicity of her legend, she was removed from the General Roman Calendar in the 1969 revision, though not from the Catholic Church's list of saints.Saint Barbara is often portrayed with miniature chains and a tower. Read more on Wikipedia

Saint Barbara is most famous for being the patron saint of artillerymen, mathematicians, and miners.

Among religious figures, Saint Barbara ranks 27 out of 2,238. Before her are Andrew the Apostle, Elijah, John Calvin, Ali, Abu Bakr, and Matthew the Apostle. After her are Samson, Martin of Tours, Jonah, Saint Stephen, John the Apostle, and Pope Benedict XVI.