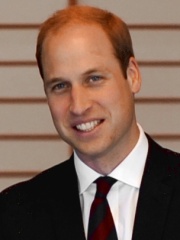 William, Prince of Wales, (William Arthur Philip Louis; born 21 June 1982) is the heir apparent to the British throne. He is the elder son of King Charles III and his first wife, Diana, Princess of Wales. Born in London, William was educated at Wetherby School, Ludgrove School and Eton College. Read more on Wikipedia

Prince William, Duke of Cambridge is most famous for being the second son of Queen Elizabeth II and Prince Philip, Duke of Edinburgh. He is also second in line to the throne.

Page views of Prince William, Duke of Cambridges by language

Among noblemen, Prince William, Duke of Cambridge ranks 221 out of 842. Before him are Alfonso II d'Este, Duke of Ferrara, Prince John of the United Kingdom, Duchess Marie of Mecklenburg-Schwerin, Hedvig Elisabeth Charlotte of Holstein-Gottorp, Princess Juliane of Saxe-Coburg-Saalfeld, and Frederik, Crown Prince of Denmark. After him are Victoria, Crown Princess of Sweden, Princess Sophie of Greece and Denmark, Louis, Count of Vendôme, Grand Duchess Maria Vladimirovna of Russia, Louise Marie Adélaïde de Bourbon, Duchess of Orléans, and Carlos, Duke of Madrid.