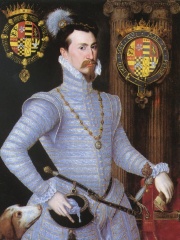 Robert Dudley, 1st Earl of Leicester, (24 June 1532 – 4 September 1588) was an English statesman and the favourite of Elizabeth I from her accession until his death. He was a suitor for the Queen's hand for many years. Dudley's youth was overshadowed by the downfall of his family in 1553 after his father, the Duke of Northumberland, had failed to prevent the accession of Mary I. Robert Dudley was condemned to death but was released in 1554 and took part in the Battle of St. Read more on Wikipedia

Since 2007, the English Wikipedia page of Robert Dudley, 1st Earl of Leicester has received more than 2,296,217 page views. His biography is available in 27 different languages on Wikipedia making him the 1,895th most popular politician.

Among politicians, Robert Dudley, 1st Earl of Leicester ranks 1,882 out of 14,801. Before him are Childeric II, Adolphe, Grand Duke of Luxembourg, James I of Scotland, Mieszko I of Poland, Samo, and Chester A. Arthur. After him are Ernest, Duke of Austria, Maria Anna of Bavaria, Alfonso the Battler, Sabah Al-Ahmad Al-Jaber Al-Sabah, Jebe, and Arghun.