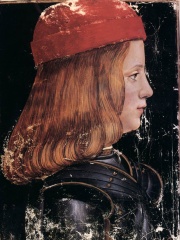 Maximilian Sforza (Italian: Massimiliano Sforza, 25 January 1493 – 4 June 1530) was a Duke of Milan from the Sforza family, the son of Ludovico Sforza. He ruled 1512–1515, between the occupations of Louis XII of France (1500–1512), and Francis I of France in 1515. After the French victory at the Battle of Marignano, Maximilian was imprisoned by the returning French troops.When Maximilian was three his father tried to arrange a marriage between him and Mary Tudor, the younger daughter of King Henry VII of England. Read more on Wikipedia

Since 2007, the English Wikipedia page of Maximilian Sforza has received more than 46,367 page views. His biography is available in 28 different languages on Wikipedia making him the 115th most popular nobleman.

Among noblemen, Maximilian Sforza ranks 128 out of 559. Before him are Miguel I of Portugal, Setnakhte, Robert the Strong, Ramesses X, Grand Duke Sergei Alexandrovich of Russia, and Grand Duke Kirill Vladimirovich of Russia. After him are Robert Curthose, Felipe VI of Spain, Ramesses IX, Harald II of Denmark, Leopold III, Duke of Austria, and Élisabeth Charlotte d'Orléans.