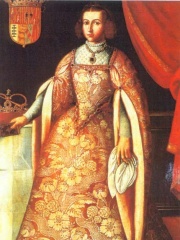 Germaine of Foix (Catalan: Germana de Foix; French: Germaine de Foix; 1488 – 15 October 1536) was queen consort of Aragon as the second wife of Ferdinand II of Aragon, whom she married in 1506 after the death of his first wife, Isabella I of Castile in 1504. Germaine's father was John of Foix, Viscount of Narbonne and son of Queen Eleanor of Navarre. Read more on Wikipedia

Since 2007, the English Wikipedia page of Germaine of Foix has received more than 176,251 page views. Her biography is available in 23 different languages on Wikipedia making her the 2,153rd most popular politician.

Page views of Germaine of Foixes by language

Among politicians, Germaine of Foix ranks 2,137 out of 14,801. Before her are Otto Strasser, Sarvepalli Radhakrishnan, Isabella II of Jerusalem, Emperor Hui of Han, Petronilla of Aragon, and Blanche I of Navarre. After her are Nigel Farage, August Bebel, Munjong of Joseon, Zhu De, Guntram, and Al-Hajjaj ibn Yusuf.

Among people born in 1488, Germaine of Foix ranks 4. Before her are Titian, Jungjong of Joseon, and Ulrich von Hutten. After her are Álvar Núñez Cabeza de Vaca, Bartolommeo Bandinelli, Sebastian Münster, Lütfi Pasha, Joseph Karo, Ferdinand Columbus, Charles II, Duke of Savoy, and Johannes Magnus. Among people deceased in 1536, Germaine of Foix ranks 5. Before her are Erasmus, Anne Boleyn, Pargalı Ibrahim Pasha, and Catherine of Aragon. After her are Baldassare Peruzzi, Francis III, Duke of Brittany, William Tyndale, Cecilia Gallerani, John of Leiden, Garcilaso de la Vega, and Henry FitzRoy, 1st Duke of Richmond and Somerset.