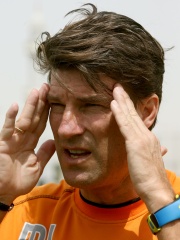 Michael Laudrup (Danish pronunciation: [ˈmiˌkʰɛˀl ˈlɑwˀtʁɔp], born 15 June 1964) is a Danish professional football coach and former player. He is the older brother of fellow retired footballer Brian Laudrup. He is widely regarded as one of the greatest players of all time.During his playing career, Laudrup won league titles with Ajax, Barcelona, Real Madrid and Juventus, playing mainly as an attacking midfielder, although he was also capable of playing in other offensive positions. Read more on Wikipedia

Michael Laudrup is most famous for his time as a player for Barcelona, Real Madrid, and Juventus. He also played for Denmark's national team and was named Danish Football Player of the Year in 1983, 1984, and 1985.

Among COACHES In Denmark