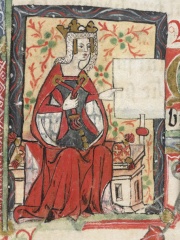 Empress Matilda (c. 7 February 1102 – 10 September 1167), also known as the Empress Maude, was one of the claimants to the English throne during the civil war known as the Anarchy. The daughter of King Henry I of England, she moved to Germany as a child when she married the future Holy Roman Emperor Henry V. She travelled with her husband to Italy in 1116, was controversially crowned in St Peter's Basilica, and acted as the imperial regent in Italy. Read more on Wikipedia

Empress Matilda was the daughter of King Henry I and Matilda of Scotland. She was also the granddaughter of William the Conqueror. She was the first woman to rule England in her own right.

Among noblemen, Empress Matilda ranks 64 out of 842. Before her are Jeanne d'Albret, Archduke Charles, Duke of Teschen, Grand Duchess Maria Nikolaevna of Russia, Camilla, Duchess of Cornwall, Fatma Sultan, and Herodias. After her are Olga of Kiev, Afonso de Albuquerque, Princess Märtha of Sweden, Albert II, Prince of Monaco, Philip the Bold, and Prince Gustaf Adolf, Duke of Västerbotten.