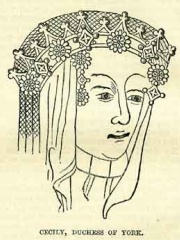 Cecily Neville (3 May 1415 – 31 May 1495) was an English noblewoman, the wife of Richard, Duke of York (1411–1460), and the mother of two kings of England, Edward IV and Richard III. Cecily Neville was known as "the Rose of Raby", because she was born at Raby Castle in Durham, and "Proud Cis", because of her pride and a temper that went with it, although she was also known for her piety. She herself signed her name "Cecylle". Her husband, the Duke of York, was the leading contender for the throne of England from the House of York during the period of the War of the Roses until his death in 1460. Read more on Wikipedia

Since 2007, the English Wikipedia page of Cecily Neville, Duchess of York has received more than 706,829 page views. Her biography is available in 25 different languages on Wikipedia making her the 4,280th most popular politician.

Page views of Cecily Neville, Duchess of Yorks by language

Among politicians, Cecily Neville, Duchess of York ranks 4,255 out of 14,801. Before her are Hsekiu, Andrianampoinimerina, Amadeus III, Count of Savoy, Gustav Noske, Ovadia Yosef, and Ferdinand IV, Grand Duke of Tuscany. After her are Maria of Alania, Joaquim Chissano, Countess Palatine Dorothea Sophie of Neuburg, Akhmad Kadyrov, Ordoño II of León, and Emperor Go-Saga.