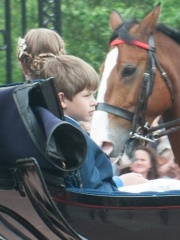 James, Viscount Severn (James Alexander Philip Theo Mountbatten-Windsor; born 17 December 2007), is a member of the British royal family. He is the younger child and only son of Prince Edward, Earl of Wessex, and Sophie, Countess of Wessex, and the youngest grandchild of Queen Elizabeth II and Prince Philip, Duke of Edinburgh. Read more on Wikipedia

Since 2007, the English Wikipedia page of James, Viscount Severn has received more than 3,408,158 page views. His biography is available in 31 different languages on Wikipedia making him the 552nd most popular nobleman.

Among people born in 2007, James, Viscount Severn ranks 4. Before him are Infanta Sofía of Spain, Princess Ariane of the Netherlands, and Princess Isabella of Denmark. After him are Aubrey Anderson-Emmons, Princess Lalla Khadija of Morocco, and Prince Lerotholi Seeiso.