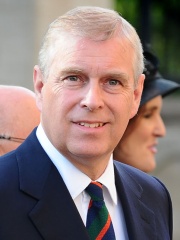 Prince Andrew, Duke of York, (Andrew Albert Christian Edward; born 19 February 1960) is a member of the British royal family. He is the younger brother of King Charles III and the third child and second son of Queen Elizabeth II and Prince Philip, Duke of Edinburgh. Andrew is eighth in the line of succession to the British throne, and the first person in the line who is not a descendant of the reigning monarch, his elder brother King Charles III. Andrew served in the Royal Navy as a helicopter pilot and instructor and as the captain of a warship. Read more on Wikipedia

Prince Andrew, Duke of York is most famous for being the second son of Queen Elizabeth II and Prince Philip, Duke of Edinburgh. He is also the younger brother of Prince Charles, Prince of Wales.

Page views of Prince Andrew, Duke of Yorks by language

Among noblemen, Prince Andrew, Duke of York ranks 105 out of 842. Before him are Duchess Helene in Bavaria, Ramesses VI, Gaius Caesar, Joan of France, Duchess of Berry, Gian Galeazzo Sforza, and Joanna I of Naples. After him are Queen Fabiola of Belgium, Hugh the Great, Pyotr Wrangel, Cleopatra of Macedon, Élisabeth of France, and Albert, Duke of Prussia.