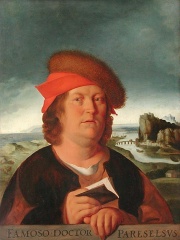 Paracelsus (; 1493/1494 – 24 September 1541), born Theophrastus von Hohenheim (full name Philippus Aureolus Theophrastus Bombastus von Hohenheim), was a Swiss physician, alchemist, lay theologian, and philosopher of the German Renaissance.He was a pioneer in several aspects of the "medical revolution" of the Renaissance, emphasizing the value of observation in combination with received wisdom. He is credited as the "father of toxicology". Paracelsus also had a substantial impact as a prophet or diviner, his "Prognostications" being studied by Rosicrucians in the 1600s. Read more on Wikipedia

Since 2007, the English Wikipedia page of Paracelsus has received more than 1,621,014 page views. His biography is available in 72 different languages on Wikipedia making him the 2nd most popular physician.

Page views of Paracelsuses by language

Among physicians, Paracelsus ranks 2 out of 438. Before him are Hippocrates. After him are Galen, Florence Nightingale, Josef Mengele, Willem Einthoven, L. L. Zamenhof, Basil of Caesarea, Robert Koch, Albert Schweitzer, Edward Jenner, and Andreas Vesalius.