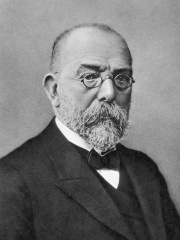 Heinrich Hermann Robert Koch (English: KOKH, German: [ˈʁoːbɛʁt ˈkɔx] (listen); 11 December 1843 – 27 May 1910) was a German physician and microbiologist. As the discoverer of the specific causative agents of deadly infectious diseases including tuberculosis, cholera (though the bacterium itself was discovered by Filippo Pacini in 1854), and anthrax, he is regarded as one of the main founders of modern bacteriology. As such he is popularly nicknamed the father of microbiology (with Louis Pasteur), and as the father of medical bacteriology. Read more on Wikipedia

Robert Koch is most famous for discovering the bacteria that causes tuberculosis.

Among physicians, Robert Koch ranks 5 out of 502. Before him are Hippocrates, Florence Nightingale, Galen, and Paracelsus. After him are Josef Mengele, Edward Jenner, Basil of Caesarea, Andreas Vesalius, Muhammad ibn Zakariya al-Razi, L. L. Zamenhof, and Albert Schweitzer.