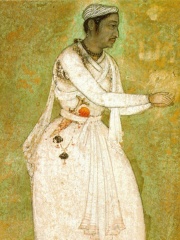 Tansen (c. 1493/1500 – 26 April 1589), also referred to as Miyan Tan Sen or Ramtanu Pande, was a prominent figure of Hindustani classical music. Born in a Hindu Gaur brahmin family, he learnt and perfected his art in the northwest region of modern Madhya Pradesh. He began his career and spent most of his adult life in the court and patronage of the Hindu king of Rewa, Raja Ramchandra Singh (r.1555–1592), where Tansen's musical abilities and studies gained widespread fame. Read more on Wikipedia

Page views of Tansens by language

Among people born in 1493, Tansen ranks 8. Before him are Pargalı Ibrahim Pasha, Anne de Montmorency, Maximilian Sforza, William IV, Duke of Bavaria, Sten Sture the Younger, and Olaus Petri. After him are Nicolaus Olahus, Yamamoto Kansuke, Clarice de' Medici, and Justus Jonas. Among people deceased in 1493, Tansen ranks 4. Before him are Frederick III, Holy Roman Emperor, Topa Inca Yupanqui, and Martín Alonso Pinzón. After him is Eleanor of Naples, Duchess of Ferrara.