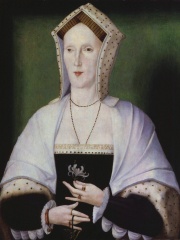 Margaret Plantagenet, Countess of Salisbury (14 August 1473 – 27 May 1541), also called Margaret Pole, as a result of her marriage to Sir Richard Pole, was the only surviving daughter of George Plantagenet, Duke of Clarence, a brother of Kings Edward IV and Richard III (all sons of Richard Plantagenet, 3rd Duke of York), by his wife Isabel Neville. Margaret was one of just two women in 16th-century England to be a peeress in her own right (suo jure) without a husband in the House of Lords. As one of the few members of the House of Plantagenet to have survived the Wars of the Roses, she was executed in 1541 at the command of King Henry VIII, the second monarch of the House of Tudor, who was the son of her first cousin, Elizabeth of York. Read more on Wikipedia

Page views of Margaret Pole, Countess of Salisburies by language

Among politicians, Margaret Pole, Countess of Salisbury ranks 2,971 out of 15,577. Before her are Emperor Yuan of Han, Zoran Đinđić, Herbert Backe, Canute I of Sweden, David Dacko, and Christopher I of Denmark. After her are Tāufaʻāhau Tupou IV, Shulgi, Agnes of Merania, Emilio Aguinaldo, Idriss Déby, and Henri, Prince of Condé.