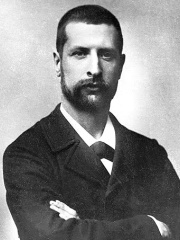 Alexandre Emile Jean Yersin (22 September 1863 – 1 March 1943) was a Swiss-French physician and bacteriologist. He is remembered as the co-discoverer of the bacillus responsible for the bubonic plague or pest, which was later named in his honour: Yersinia pestis. Another bacteriologist, the Japanese physician Kitasato Shibasaburō, is often credited with independently identifying the bacterium a few days earlier, but may have identified a different bacterium and not the pathogen-causing plague. Read more on Wikipedia

Alexandre Yersin was a French bacteriologist who discovered the bacteria that causes bubonic plague.

Among physicians, Alexandre Yersin ranks 100 out of 502. Before him are Stanley Cohen, Ctesias, Otto Loewi, Bernardino of Siena, Elias Lönnrot, and Oswald Avery. After him are Elizabeth Blackwell, Frederick Chapman Robbins, Ragnar Granit, Charles Nicolle, Arvid Carlsson, and Eric Kandel.